The Evolution of Skiing 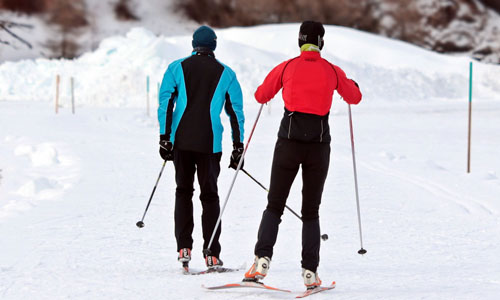 Modern skis are the product of cutting-edge technology allowing manufacturers to design and refine their equipment with sub-millimetre accuracy, ensuring that your skiing experience is as smooth and as ergonomic as possible. But it wasn't always that way! Today, I'm taking a look back at how the development of skiing equipment has changed over the years and what effects this has had on the sport of skiing itself.

Skiis really have undergone a world of change since the early days, with new materials, new manufacturing techniques and even new shapes having contributed to a complete transformation in the way that we descend down the slope. This may be hard to believe, but the first skis appear to have been invented more than 10,000 years ago in China, where cave drawings depict ancient hunters navigating the landscape on primitive skis. Other snowbound societies in places such as Russia and Scandinavia were similarly early adopters of this new technology.

The 1800s and the invention of wooden skis

The cambered ski was developed by woodcarvers in Telemark, Norway. The bow-shape cambered ski arched up towards the center to evenly balance the weight of the skier across the length and breadth of the ski. This thinner, lighter ski ran faster and maneuvered with better agility than more primitive skis.

Sondre Norheim of Norway first demonstrated the Telemark ski, having a side cut that narrowed the ski underfoot while the tip and tail remained wider. In the same way as the camber, the sidecut produced a ski that flexed more easily when tipped on edge, so that in a turn its edge followed the shape of the turn and didn’t skid sideways.

Most high-quality European skis were made of strong, springy ash. In 1882, the first hickory skis were produced in Norway. Hickory was so hard and tough that it was difficult to work with traditional hand tools. But with modern carbon-steel tools, Norwegian ski makers began turning out hickory skis. The tough wood made it possible to build a thinner, extremely flexible ski with good strength, and the hard base was less likely to gouge and scar enough to slow the ski down or cause it to sideslip during a downhill run. 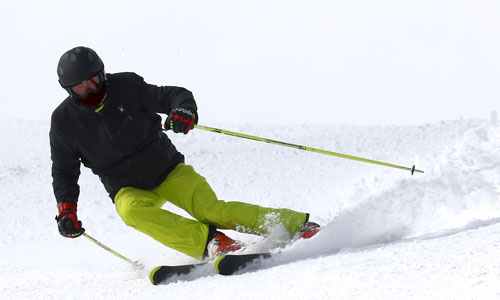 The 1920s and beyond: Innovation and improvisation

The segmented steel edge, invented by part-time mountaineer Rudolph Lettner of Austria in 1926, enabled better grip on hard snow while still allowing the wood to flex naturally. However, edge segments could break in two. In that case, it was usually difficult or impossible to continue skiing. Skiers usually carried spare edge segments, along with a screwdriver, screws and glue, to make field repairs. Then, in 1928, Swiss ski racer Guido Reuge invented the Kandahar binding, using a spring-loaded cable to hold the heel down for alpine skiing.

Innovation and experimentation continued throughout the 1930s. In 1932, the first successful three-layer laminated skis were invented by Bjørn Ullevoldsaeter of Norway. These skis were made using waterproof casein glues, did not delaminate easily and lasted much longer.

The 1940s and beyond: The introduction of Redux Glue and the fiberglass

Then, in 1945, the Vought-Sikorsky aircraft company used Redux glue to create Metalite, an amalgamation of aluminum with a plywood core. The company used the process to build an aluminum-laminate ski with a wood core. A thousand pairs of the Truflex ski were made but when aircraft production picked up, the company dropped the project and did not release the patent.

It was not until 1952 that the first fiberglass-reinforced plastic ski, the Bud Phillips Ski, was not satisfactory enough to endure the pressure. The first successful plastic fiberglass ski was invented by Fred Langendorf and Art Molnar, in Montreal, and marketed under the Toni Sailer label in 1959.

Steady improvements in the quality of plastic materials enabled efficient construction of skis, but these were very expensive. Manufacturers mixed small quantities of Kevlar, carbon fiber, ceramic fiber, and other high-strength materials into fiberglass to help improve strength, resilience, damping, and torsion.

Then in 1989, Volant Skis, the first commercially manufactured steel ski, introduced by Bucky Kashiwa was introduced. But, their factories were closed-down in 2001 due to high labor costs and production now moved to Austria. Some of the Volant production equipment were bought by David Goode, who used it to produce a ski made largely of carbon fiber.

Today, we have skis that are manufactured using the latest high-tech techniques, but it's amazing to think of how passionate people must have been to continue enthusiastically skiing over a hundred years ago, even when their equipment was not really up to scratch.