Donnie Campbell has set the Fastest Known Time (FKT) cycling through the Badger Divide. The first time he set out to ride from Glasgow to Inverness, he discovered that the route is a different version of the original. He returned three weeks later to set FKT again, this time on the right route!

In about 19 hours, 14 minutes and 16 seconds, he rode 200-miles from south to north. The 36-year-old smashed the previous fastest known time of 23 hrs 36 minutes by more than four hours.

Donnie started his journey from his home, the city of Iverness by train. He wanted to make the most out of the good weather, and made the decision to start off from the Badger Divide at 11:45pm on Sunday.

What is the difference between the two Badger Divide routes?

Donnie first rode the Badger Divide route after a series of internet searches. It turned out to be the ScotDuro race version, which is also known as Badger Divide Lite. The BD Lite includes more road sections, missing out some tough trail sections. It has a total elevation of 4923m which is similar to the other Badger Divide route.

Donnie had mentioned that his first ride around May was difficult due to heavy downpour all day. It was mostly unenjoyable for him. He finished the trail under 20 hours but missed a lot of scenic views. But he carried through despite all the hardships.

After the first time, Donnie had discovered the original Badger Divide route which was created by Stu Allan. He then decided that he would give it another go when the weather was better. 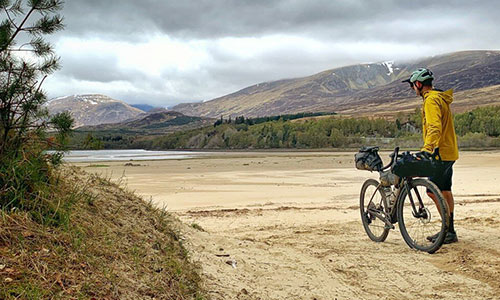 The second time Donnie rode the route, it was different. The weather was in a better condition and it was the ideal temperature. He carried some food, including a pizza, empire biscuits, trek cereal bars, and water. He made a pit stop near Fort Augustus and dashed into a garage for more food. Donnie described this as the highlight of the ride.

There were several sections throughout the ride which were tiring. The temperatures went as low as 6°C early on the ride, so his feet went cold for almost eight to nine hours. There were some parts which felt never-ending to him. He described about the difference both routes had in several places.

The ScotDuro route has more tarmacs all over which makes it easier than the original Badger Divide route. The ScotDuro route also flows from point A to B from Glasgow to Iverness, while the original Badger Divide uses more trails and includes more scenic views. Donnie had a good time with the second ride. The weather was better and he enjoyed more.

Highlights of the ride

The sunrise between Loch Lubaig and Stùc a' Chroin was mesmerising to look at. Donnie enjoyed the last section of the ride because he knew he was going to be home soon. He was happy to have set the new fastest time. Donnie thinks it’s possible for someone to do sub-19 hours. A quick pit stop for about 10 minutes and a bit of refuelling will allow anyone to ride quicker than he did.

Stu had commented on Donnie’s fastest time, saying, “He has put a big dent in the previous time”.